We are proud to announce that Charlie, Elan’s Bubbly Bulbasaur, has just achieved Philippine Grand Champion status during the 2019 Philippine Circuit held this weekend at the Smart Araneta Center. He is the big, bright star of Elan Miniature Schnauzers.

Just in case you don’t know it, the Philippine Circuit is the most prestigious dog show in the country. Exhibitors from all over the world come to Manila each year to take part in the dog shows, creating super tough competition. This year, Charlie was among the contenders. If I may add, he went up against the equally beautiful Blake (HOF/Ph. Grand Champion Blake of Alex House), sired by my very own Chokdee (Int/Ph. Gr. Ch Plasma’s Lucky Star at Moonstone). Incidentally, Blake achieved his Hall of Fame status during the circuit, the highest distinction a dog can achieve in the Philippines. Both were trained and groomed by Decanus Miniature Schnauzer’s Eric Decano.

As a breeder, it is a source of pride when one of your own comes home with a title–whether it’s a full breeding, or one sired by our studs, the feeling is the same. But Charlie gives me a special buzz.

What I love is that Charlie does not only have all these titles to his name, he also has a great human, Thirdee Duran, who spoils him to pieces. As a breeder, it is very important for me to know that every puppy that leaves my fold goes to a trustworthy, loving, and nurturing home, and Thirdee is a perfect choice for Charlie. Thirdee is the model dog owner who genuinely loves his dog and takes very good care of him, ensuring he is always happy, healthy, and well-groomed. In the grand scheme of things, the title is really just the icing on the cake.

Again, congratulations to Charlie! (All photos were taken by Thirdee Duran) 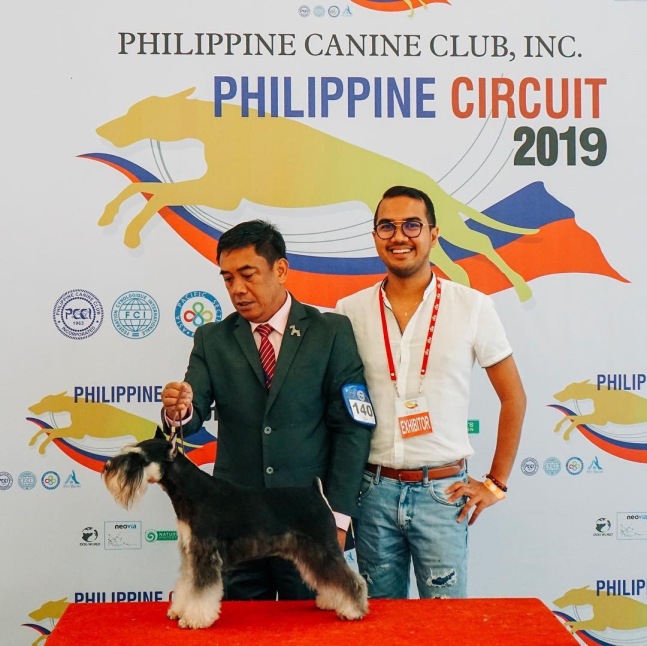 Mother of a pack of mini schnauzers and rescue dogs. Occasional writer and editor in two parallel kingdoms. Advocate of special needs kids. View all posts by tonreyes

This site uses Akismet to reduce spam. Learn how your comment data is processed.

Happiness is having a dog by your side